Power of Rings Episode 6 Breakdown: What Devastation Adar Has Planned?

Ok! So THE POWER OF RING EPISODE 6 is finally here, and the entry is filled with Easter eggs, hidden facts and a colossal ending which I will break down with today’s spoiler.

The popular series has been very hit and mixed, the power of ring episode 6 and just when I wonder if there won’t be any foul play, you come and ultimately redeem yourself. This week’s instalment is one epic treat The Lord of the Rings has given to all of us.

In Episode 5 of Lord of the Rings, we saw Galadriel, Halbrand, Isildur, Elendil, and Queen Regent Miriel’s army set sail for middle-earth to battle with the Southlanders against their common enemy, i.e. orcs.

Meanwhile, as the army of Orcs, supervised by evil Adar, approaches for the fight, the Silvan elf Arondir attempts to save the Southlands hiding at the Watchtower.

Will any of them survive the storm to come? Here is what you should know about the Lord of the rings episode 6!

The Power Of Rings Episode 6 Recap

“The power of ring episode 6” At the Southlands, Adar wanted to create a way for the orcs to thrive during the day, and in the last episode, he discussed how he wanted to destroy the sun, sky and mountain.

He rummages through the soil in today’s week and says New Life. In defiance of death. He gives a speech to awaken his followers and leads the treacherous men and the Orcs’ army towards the Watchtower.

Upon reaching the fortress, evil Adar enters by the door, feels Arondir and commands the orcs to search.

As they hunt for Arondir, the latter triggers an explosion at the Watchtower by firing an arrow, collapsing on top of the orcs in the fortress.

The explosion also harms many of the Orcs’ families heading towards the Watchtower.

Taking a sigh of relief, the Southlands get elated seeing their plan moving in the right direction. Afterwards, they return to their village to prepare for further war against the Orcs.

On the other side, as the sun rises, Isildur wakes up and feeds his horse on the ship from Numenor. Galadriel then encourages Elendil’s son to be humble as he expresses his feelings about moving away from Numenor. 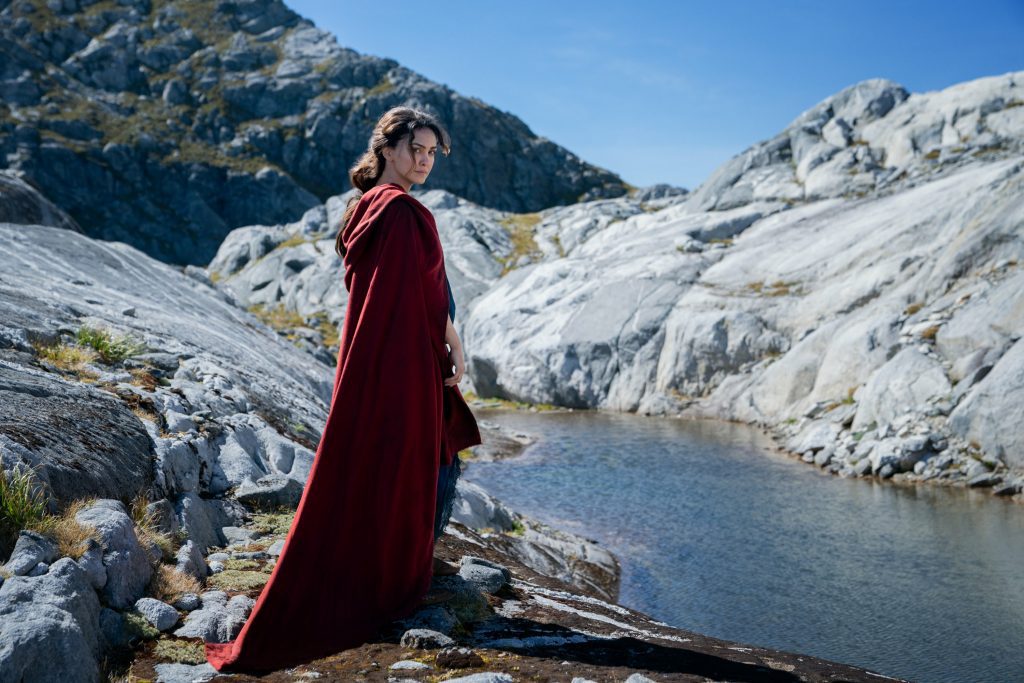 Both discuss the battle that awaits them in the Middle-Earth, with Galadriel observing the likeness of his father. Isildur then says that somebody told him he looks exactly like his mother. Galadriel asks him about his mother, and Isildur reveals that she drowned in a watery zone. At the cabin, Elendil updates Queen Regent Miriel about their expected arrival time on Middle-Earth.

In Tirharad, as Arondir cannot destroy the Hilt, he leaves Bronwyn to hide it while Theo watches him.

Bronwyn and Arondir guide the villagers in preparing for the attack as many take their places; Theo guards the young and the elderly inside the Tavern.

Before the community performs the tasks, Theo asks Bronwyn what she used to do when getting scared of something. Bronwyn responds, In the end, this shadow is a small and passing thing. There is light and tall beauty ever beyond its reach. Find the light, and the shadow will not find you.

As the sun sets and darkness arrives, the Orcs come out from their zones, and Bronwyn starts fire after a fierce fight with the Orcs. The archers and Arondir aim at the Orcs after they get trapped in the fire.

One of the large Orc attacks Arondir, resulting in one-on-one combat. But, Arondir falls in danger of being killed, and Bronwyn saves and kills their enemy. 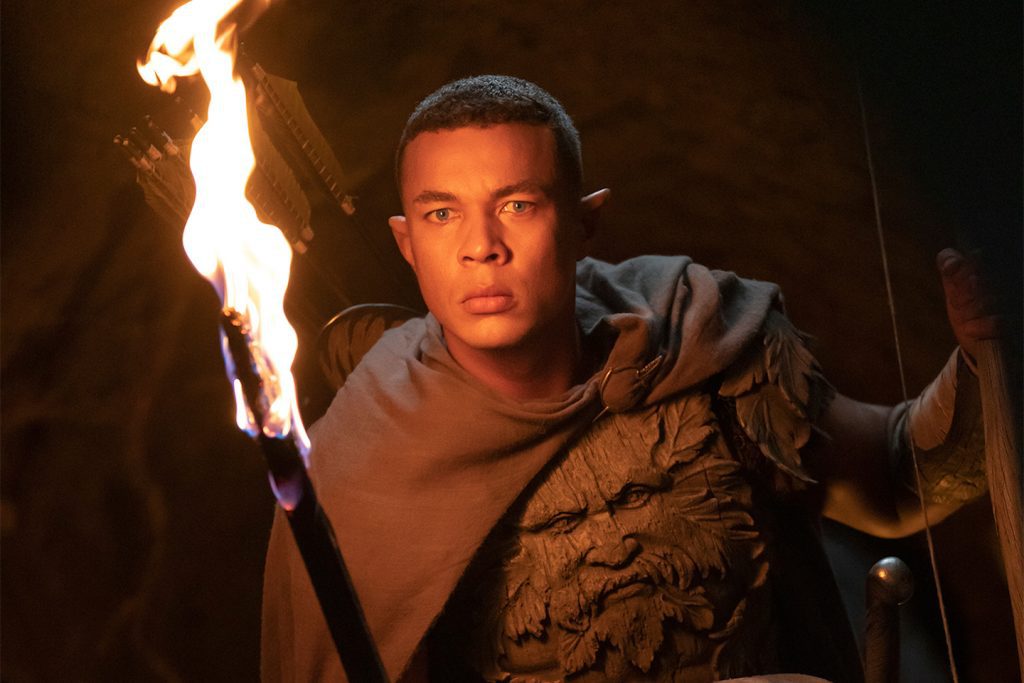 The Southlanders win over the orcs until any other enemy arrives at the land. Some Southlanders are injured, and some are killed.

A scared Theo is forced to help Arondir cure Bronwyn’s arrow gash as they cauterize her injury. The Orc’s army returns to the tavern and threatens to kill everyone if Arondir won’t hand the Hilt back to them.

When the orcs threaten to kill Bronwyn, Theo unveils the location of Hilt and gives it to the leader of the orcs, Adar.

The Numenors Finally Arrived in the Land!

The power of ring episode 6. While the Southlanders have lost all hopes, they hear Halbrand and Galadriel arriving with Numenor’s army in the village and attacking the Orc hordes. Before the guards arrive, Adar assigns a task to Waldren.

Once again, the battle was turned against the Orcs, seeing which Adar tried to flee on horseback. But Galadriel spots him, and she chases him along with Halbrand.

Back in the village, some orcs are held captive, while Ontamo helps the Southlanders rebuild the war. Isildur and Valandil plan to join Galadriel to catch the Orc that escapes. 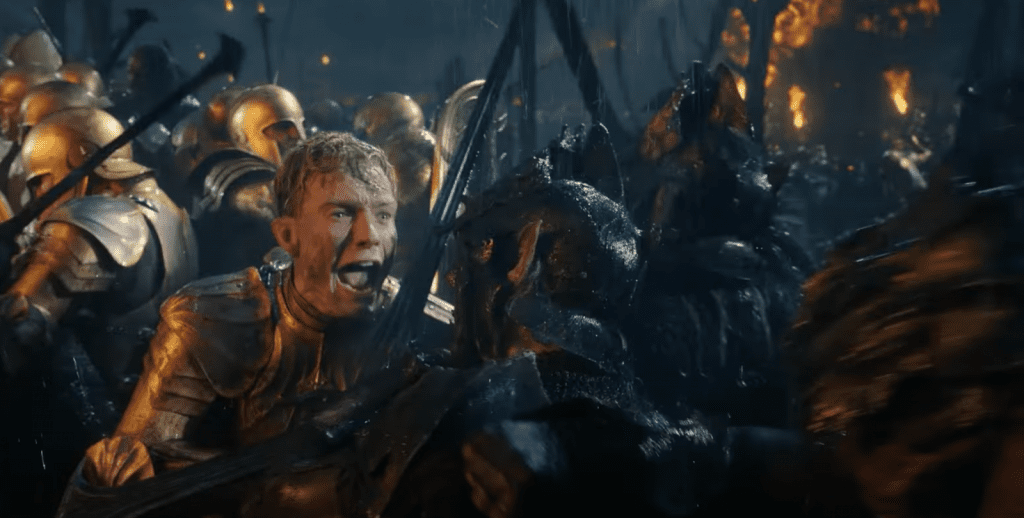 In a barn, while Galadriel interrogates the captive Orc, Adar says he is one of the Uruk. Then, Galadriel threatens the Orc to expose him to the sunlight, after which he reveals that he has killed Sauron.

On the other side, Adar then reveals to Galadriel that they will soon take over the Southland, to whom Galadriel calms him with a mockery.

Further, Adar claims that Galadriel is also an Elf, and she is corrupted by darkness. Adar’s comment prompts her to threaten their life of Adar, but Halbrand halts her.

Now, before Adar could ask Halbrand about his identity, he left the place with Galadriel taking the Hilt.

Around the forest, before Halbrand approaches Galadriel, she sits with her blade. She tells Halbrand to free himself from the past and live in the present.

In the village, Bronwyn was introduced to Queen Miriel during the victory celebration. Miriel then introduces Halbrand and Bronwyn to each other, after which the latter hails Halbrand, the King of the Southlands.

After this moment, Galadriel returns the Hilt to Arondir, who then hands it to Theo and asks him to give it to Numenoreans to toss into the sea. Theo unwraps the Hilt and discovers a plain wooden axe instead.

Next, we can see that Waldreg has already taken the Hilt to the Watchtower, which converts into a smoking sword. This prompts the dam near the fortress to flow mass water through the tunnel and devastate the Southland further.

Soon the water flow travels to the volcano, resulting in huge fling flames at the village. Elendil rushes to save Miriel, while a scared Galadriel stands and observes as the smoke, fire, and ash approach the place.

Meanwhile, inside the barn, Adar is shown to have escaped from the land. And with that, episode 6 of Power of Rings wraps up!

Wait for the next episode to uncover what happened next in the story!

Lord of the Rings, Episode 6, brings the rollercoaster ride we all are waiting for the show to come with. There were many twists and turns galore in the sixth episode, with the Southlanders and residents of Numenor repeatedly winning on the battlefield. Despite the episode delivering all exciting moments, we still could not see Harfoots and the consistent intrigue among the dwarves and elves. However, we are finally watching what Lord of the Rings is all about, with the show giving us a sense of where its first season is going. Further to know what happens after destruction takes place in Southland, you will have to wait for the next episode.