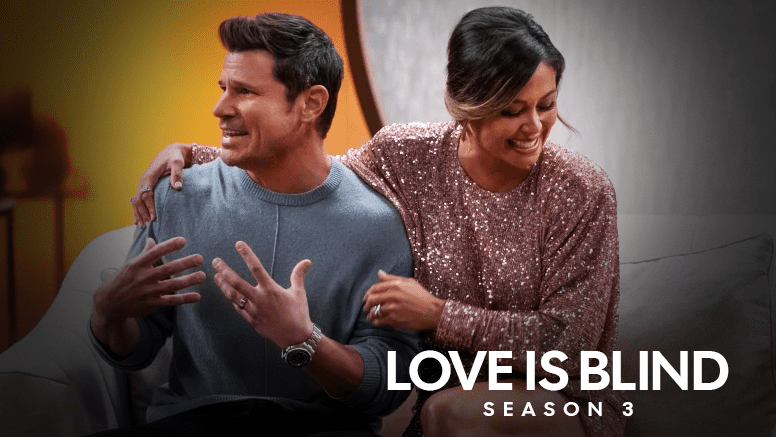 Netflix’s famous dating show, Love is Blind season 3 wraps with eleven episodes featuring different couples getting to know each other. Over the process, they are encouraged to decide whether they want to marry each other or part ways. While some find their true love, others call off their relationship.

The official synopsis of Love is Blind season reads- Nick and Vanessa Lachey host this social experiment where single men and women look for love and get engaged, all before meeting in person. If you have followed this season, you would know how well those experiments have gone and what turns the couple’s equation took throughout their journey with Vanessa and Nick. From a predictable beginning to an emotional ending, here is Popgeek’s review of season 3 of Love is Blind.

Love is Blind season 3 starts with a usual beginning like its previous two seasons. It introduces two boys to the audience as the 2.0 version of Shake, and through all the fun and hassles, the two boys find their ideal match. But will their relationship sustain, or will Nick and Vanessa’s twist weaken their bond? Well, watch the episodes to seek your answer. Further, five couples make their way to the altar but end with only two weddings each other. As we saw in the second season of Love is Blind, two couples marry each other and part ways within a short period, season 3 will experience the same. It depends on the contestants and the mighty twists that come ahead!

Speaking about the Love is Blind season 3 cast or the love singles, they have done an excellent job. From fighting hard to win the challenges to putting the best of their efforts into doing something special for their partner, the men and women of Love are Blind are fabulous. The reality dating show introduces us to a couple: Alexa Brennon, Raven and SK, Nancy and Bartie, Matt and Colleen, and Zainab and Cole.

Out of these names, we barely knew anyone who didn’t face obstacles before reaching the altar. Perhaps, when the situation was too good to be true for them, it made the couple question how the paths were so easy to walk over. Whatever the case, one thing we surely know is that we have the strongest contestant this time. They know what to expect from the rollercoaster process and how to play and win the game. However, if we talk about the emotional pressure, the season 3 contestant is slightly less capable of handling them. This can be because they do not have any relationship experience yet.

But, to some extent, their assumptions concerning the smooth process were partially correct. So, will their instincts and the solved puzzles help them decide on marriage? Time will tell the tale now!

If we talk about the script, it is too predictable to make guesses about the upcoming episodes. How can anyone not know the couple’s next move after following their real-life-looking journey? Regarding shoot location and setup, Love is Blind season 3 has raised the bar set by season 1 and season 2, respectively. Be it the holiday resort or proposal venue, everything stays true to our expectations. But in the end, all that matters is the story behind the concept, and it is the central point where the show lacks. Being too predictable, we could not find anything that would surprise the audience. The showrunners must check on that and ensure their real-life things don’t come just as another ordinary day.

When will Love is Blind Season 4 Release?

As season 3 of Love is Blind wrapped on 9th November, the reality dating show fans are keenly waiting for the next season to premiere on Netflix. The intense courtship of the five couples has just led the viewers to demand more such experiences from the show.

So, when will Netflix premiere Love is Blind season 4? Well, the official announcement for the fourth season revival has been made, and its filming is also completed, but we are yet far away from the Love is Blind season 4 release date. As season 3 just concluded its finale episode three days ago, season 4 will come out around February 2023. As we all know, February is considered the month of love and romance; makers can release the first episode on 14th February 2023. Popgeek will update you about the confirmed release as soon as Netflix reveals the official date for the fourth season of Love is Blind.

Similar to season 2 and season 3, Love is Blind season 3 also took us on a rollercoaster ride of different emotions. While you will root for a few couples, you will also find a few annoying. But we won’t forget that season 3 didn’t give us any surprising element. With so many teams still being together, who are you rooting for from season 3 of Love is Blind? Please share your thoughts in the comments section, and don’t forget to watch the season streaming only on Netflix.