Lord of the Rings Episode 7: Mordor is Born in The Southlands

The Lord of the Rings: The Rings of Power continues entertaining its fan from its sixth episode to the penultimate episode of the season.

Titled The Eye, Lord of the Rings episode 7 has come with some connotations for fans, but this’s weeks instalment is mainly gathered around how the show’s characters pick up the broken pieces after the Orodruin mountain’s volcano erupted in the Southland.

In addition, we also catch up with The Stranger and the Harfoots before watching Elrond and his goal of getting Mithril from Khazad-dum’s Dwarves. So, here is the spoiler of what happened in Episode 7 of Lord of the Rings: The Rings of Power.

Lord of The Rings Episode 7 Recap: The Eye

The episode begins with the charred ruins of Southland, where we see Galadriel awakened and covered with ash. As she stood at her place when the vast volcano erupted in the Southland, she was hit by a galloping horse before serving the village’s fiery wreckage. 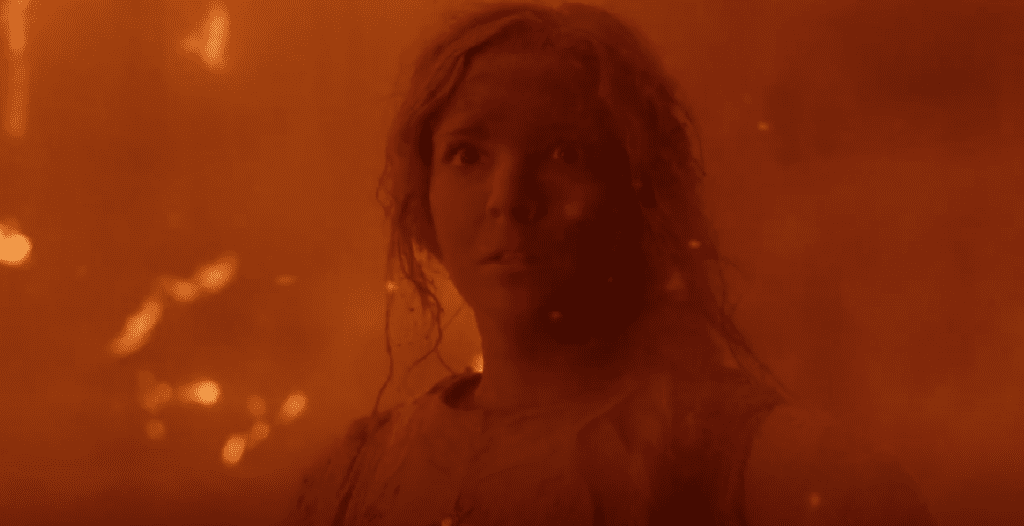 Galadriel calls Elendil and Halbrand before countering a scared Theo. At the village, Valandir and Isildur move some wreckage to find their friend Ontamo’s dead body. On the other hand, Queen Regent Miriel helps children and women before a timber falls on a few. Ash and dust fall on Miriel’s eyes, leading her to scream for help. While Valandil aids the Queen, Elendil calls Isildur.

In the meantime, the Harfoot caravan moves through the Middle-Earth and discovers some remains of the debris of the South’s volcanic eruption. Here, Sadoc Burrows reveals that someone once told him about a mountain that spits fire, which also signifies a new evil. After that, the Harfoots continue picking apples while the ashes have covered some trees.

The Stranger checks on the tree as Burrows believes he may fix it, but Poppy Proudfellow and Nori Brandyfoot are worried about the same. As Burrows tries to approach The Stranger, he mutters to a tree which further witnesses some cracks, and the tree shakes. A tree branch then falls on Nori and their younger sister, hurting Nori. The Harfoots then shockingly look at the upset stranger.

In Khazad-dum’s city, Prince Durin IV and Elrond approach King Durin III for a supply of Mithril to aid the Elves for riches. When Elron exits with King’s guards, the King talks about the people’s nature and states that he won’t risk any Dwarf’s life to save the Elves, so while the Prince steps ahead to support his friend, the King apologies for denying it.

In a discussion with his wife, Princess Disa, Prince Durin expresses that he can’t pressure his father to help the Elves, to which Disa suggests that he can encourage the Lord of the Dwarf. Elrond visits, where he is clarified that the King has refused to answer any plea of the Elves. Prince Durin asks Elrond to stay for the dinner, after which the duo have a parting as they decide to move towards goodness. After Elron leaves the place, Prince cries and throws a piece of Mithril.

The Numenoreans Walks For Safe Havens!

At the Southland, Theo asks Galadriel why the orcs have done this to us, and she responds that they want to take control over Southland and make it their home. Elsewhere, the Numenoreans make their way by horse and foot from the Southlands to reach a safe place. Elendil searched for Isildur but couldn’t find him. Queen Regent and Valandil arrive at the site, but there is no news about Elendil. As they walk, Theo tells Galadriel about his fears that he may lose Arondir and his mother, Bronwyn. Galadriel suggests he wait for them, and they move to find the camp on the hillside set by Numenor.

Galadriel noticed that when she was Theo’s age, there was no existence of the Orcs, and no dark acts like these had ever happened in her childhood.

At the forest, Queen Miriel asks Elendil about the distance left to reach the camp, which makes Elendil realize that Queen Miriel has lost her eyesight. This doesn’t make Miriel lose her strength. Instead, she encourages them to guide her horse, as she does not want anyone to notice her blindness. 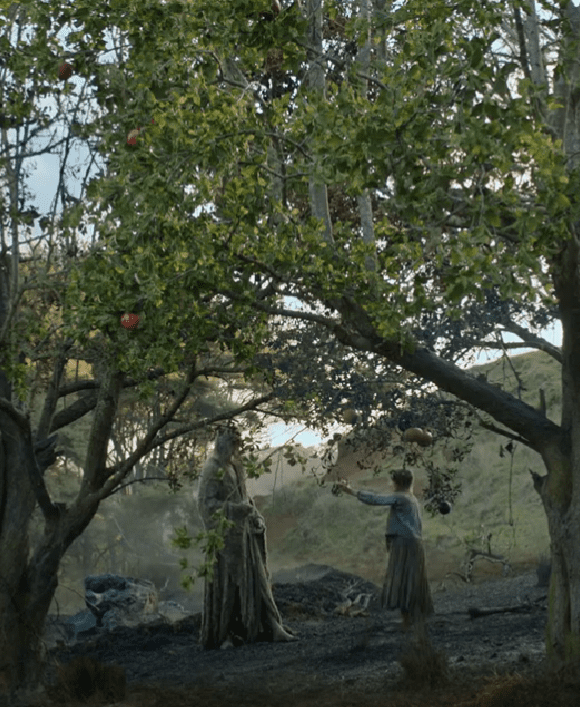 Sadoc directs The Stranger when he sadly looks at the Harfoots before stepping ahead. As he departs from the place, Nori is quite upset with seeing him go. She has resigned to her life as a Harfoot again and decides not to follow any other adventurous dream in her life.

At night in the Southland, Galadriel and Theo camp near a fallen tree and the latter questions her if she has ever lost someone she loved. To the answer, Galadriel talks about her husband Celeborn and her brother Finrod. Theo apologises for giving the Hilt to the enemy. Galadriel is not angry with him about the subject.

At the Numenoreans camp, more survivors and the soldiers of the devastation arrive in the Southlands. Theo and Galadriel soon arrive at the centre, and Theo searches for her mother inside the medic’s tent. Thankfully, she is safe, as she comes across Theo and the mother-son having an emotional reunion.

After that, a wounded Halbrand comes out of the tent and everyone bows to him as he walks by. Theo and Galadriel ride to Lindon with a sword.

Back in Khazad-dum, Princess Disa counselled Prince Durin IV and blamed the King for his paranoid path. She notes that they are the owner of the Mithril, and someday they will dig it. King Durin III command the hole to the Mithril before throwing and burning the leaf as it falls to the mountain’s depths.

Want to know more about of LORD OF THE RING EPISODE 7 CLICK HERE.

In the destroyed Southland, a victories Orc’s leader Adar claims his rule on the Southland and calls the place Orc’s new home. The Orc’s army calls Adar the Lord of the Southlands, and he gives a new name to the site Mordor.

So, here is when the Lord of the Rings Episode 7 concludes with the series ending its first season next week.