House of the Dragon Episode 7: The Game Turns Nasty This Time! House of the Dragon Episode 6 took us ten years into the future. This week’s episode woven a considerable amount of objective bonkers gathering an hour full of mysteries, conspiracies, and whatnot. House of the Dragon Episode 7 Usually, we think, what could be worse than a Westeros wedding? But, I guess this time, it’s the Westeros funeral that has shown us some ugly games. So, without waiting for a minute, let’s quickly dive into the spoilers and find out what exactly happened when Qarl slashed a blade on his love Lenor. House of the Dragon Episode 7:

The House of the Dragon Episode 7 is titled Driftmark. The episode begins with the funeral of Lady Laena. Princess Rhaenyra, who is all grown up, now traveled to the seat of House Velaryon along with King Veserys and their respective entourages to mourn Laena’s death and to offer support to her family. While Ser Vaemond conducts the ceremony, he passes a comment about the strength of Velaryons to Rhaenyra and her two older boys. So this is confirmed that there is something fishy at the ceremony.

Then Laena’s coffin is released into the sea surrounding Driftmark, and that’s that. There is a weird vibe at the post-ceremony reception. Jace is furious that no one cares about Ser Harwin’s tragedy, to which Rhaenyra tells him to pipe down concerning the same, while Alicent watches their conversation.

House of the Dragon Episode 7 Conversely, Aegon says he doesn’t want to marry Helena. And when Ser Criston observes that Larys is constantly looking at Alicent since their arrival. And all this while, Daemon, and Rhaenyra catch each other on the beach but do not exchange conversation. After a few minutes, she informs him that Laenor is not the biological father of her children.

Sooner, Viserys invites Daemon and his family to return to King’s Landing, but he staunchly refuses the proposal. Everyone moves back to their quarters. Rhaenys says that her daughter lacked high tide’s masters while she experienced labor pain. She is too tired and too sad to maintain the usual routine. She calls her husband and blames him for only wanting the Iron Throne to gain power and status for himself and not to get justice for her. But, he argues that whatever he does is only to maintain their family’s legacy. After that, she states that she wants Driftmark to walk on Leana’s path so that Velaryon’s blood can rule the family’s ancestral seat.

Picking Up Daemon and Rhaenyra’s Conversation

House of the Dragon Episode 7 While Daemon and Rhaenyra continuously walk on the beach, the latter tells Daemon that, for some time, Lenor wasn’t interested in keeping their guise. They also attempted to make the little dragons and fulfilled their duty, but there was no joy with it. Further, she tells Daemon she regrets not asking Ser Harwin to stop at King’s landing. Refusing her statement, Daemon claims to blame Otto Hightower and Alicent for being responsible for the tragedy of Ser Harwin.

As the duo shares a heartful conversation, they finally come to the primary matter when Rhaenyra asks Daemon how he left her at that brothel back in the day and if he loved Laena. Acknowledging her questions, Daemon states that We are happy enough. Rhaenyra sympathizes with Daemon, draws him closer, and goes on for a kiss, which Daemon also reciprocates. The duo then find a cover from the wind, only to get open to each other.

The Rise of a New Dragon

Aemond walks up to the beach where the dragons are sleeping. He reaches the Vhagar and tries controlling him, climbs on him, and they take off from the beach. But, Laena’s daughter has watched him doing so. After landing, everyone confronts Aemond for flying at Laena’s dragon. While Rhaena fumes at him, he claims that your mother is dead, and the Dragon has a new rider now. When Aemond calls Luke and Jace bastards, their argument turns bloodier, ending with Aemond missing, as Luke slashes a blade on his face.

The fight draws everyone to the court, where Viserys attempts to figure out things. Daemon leans against the backdoor and watches this baby’s episode at the Hall of Nine.

While Alicent blames Rhaenyra’s sons, she also insults them, stating that they are not the heirs of the Iron Throne. Very questions his Aegon to name the person who told him that Laenor is not the father of Rhaenyra’s kids, to which he says that everyone knows this. Getting angry with the atmosphere at the court, Viserys shouts and commands to stop the fight, apologize and move on right now. He dismisses the matter further. But that’s not enough for Alicent and demands an eye for an eye. Alice asks Sir Criston to get an eye out for Lucerys’ peeper. Very stop him and say that the matter is finished now. She tries to attack Rhaenyra’s sons, but Rhaenyra blocks her. When Ser Harrold yells, Daemon steps into the fray, and Ser Criston does his body check.

Therefore, only Rhaenyra and Alicent are grappling with the center this time. Keeping the knife in hand, Alicent breaks down in front of Rhaenyra and asks her to do what you want to. Here, the princess taunts her and says, Hiding beneath the cloak of your righteousness. But now they see you as you are. Alicent stabs Rhaenyra, and her blood drips onto the floor.

Otto Hightower reaches Alicent’s quarters, admires what she has done today, and reminds her she has the determination to win a war. In Rhaenyra’s quarter, Laenor is shocked to see his family bloodied. They both share a conversation in which Laenor tells Rhaenyra that he will soon commit to marrying Ser Qarl and that she deserves a better husband now. 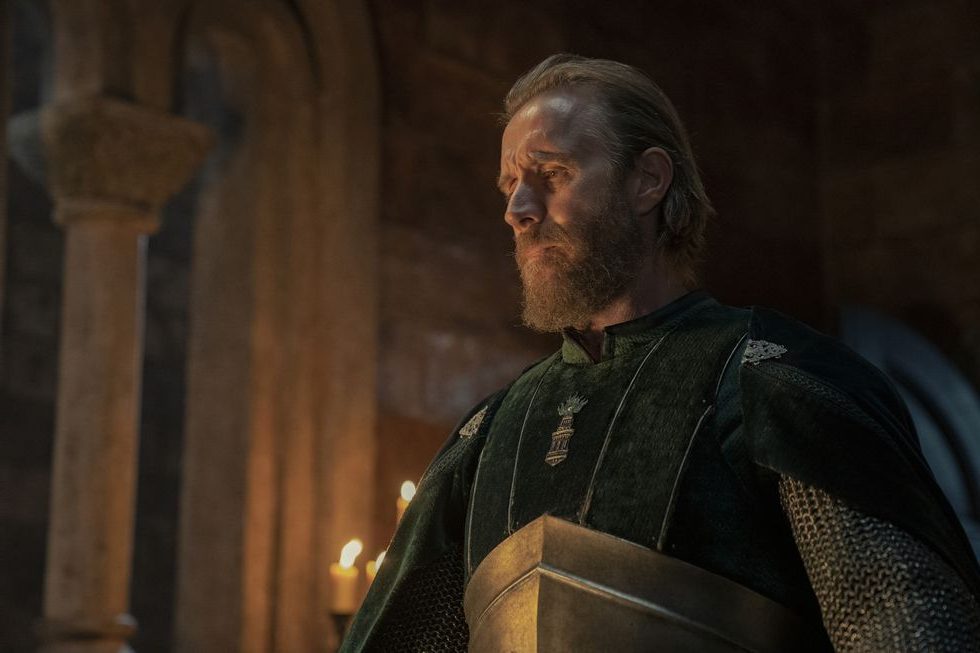 Here Rhaenyra also agrees with him. She walks to Daemon and asks him to marry her, but he says he can’t marry her until Laenor is alive. And when Daemon offers a lot of gold to Qarl, a quick death is witnessed in the scenario, but it’s not Lenor.

When Carl tries to kill Laenor, a servant catches him and rushes for help. In the meantime, a random guy is thrown into the fireplace leading everyone to believe that it’s Lenor.

In the aftermath, Daemon and Rhaenyra marry in a ceremony. And later, we discover that Laenor is safe and is in a rowboat with Qarl, making their way to live peacefully somewhere in a corner where no one can find them. And that’s where House of the Dragon Episode 7 wraps up!

House of the Dragon Episode 7 has set the pace for a Targaryen Civil war which we always would take place sooner. The only reason the show has faced audience wrath is because of stretching the storyline unnecessarily. So far, the House of Dragon episode has mostly been talky and less actionable. Although, now, as a cold war among the Targaryens has officially begun, with one demanding the eye of another, the stress in the Kingdom has broken out.

It is Queen Alicent and Larys Strong who have brought us the most striking moment of the episode. In the previous episode, Alicent was shocked to know Lord Strong and Ser Harwin’s death was planned by Larys, and now that he is suggesting her get an eye for an eye, how can Alicent agree to do so? The question of Visery’s survival remains the same in episode 7. To an extent, we all know the showrunners are saving this twist to strike for the season finale. But, can it be the only reason the Targaryens will fight with each other, or are we to see more deaths in the next episodes? Whatever the case, we are affirmed that the Dance of Dragons is not too far to begin.