House of The Dragon Episode 10 Officially Begins The War 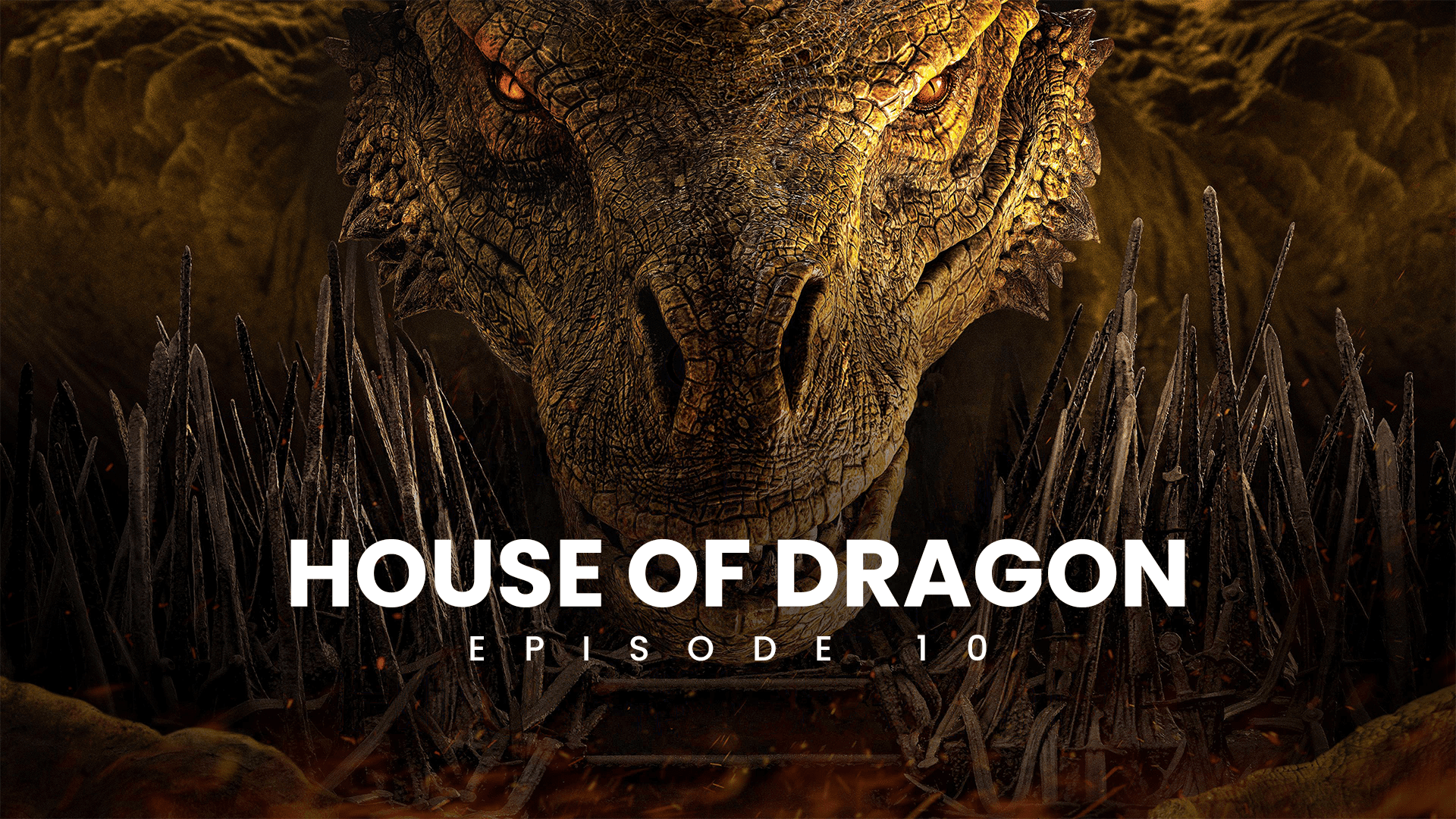 House of the Dragon Episode 10

Since the first episode of House of the Dragon streamed on Disney+ Hotstar, many were comparing the series with Game of Thrones, but seeing the season finale, we can say that the show has successfully established itself as a different series. On one hand, Game of Thrones showed a very expensive CGI battle and killed its primary character. House of the Dragon represented us a story of broken families preparing for war.

With Rhaenyra claiming her rights over the throne and Aemond murdering his nephew, the civil war for the Iron Throne has officially begun. So, without waiting further, let’s break down House of The Dragon Episode 10 and find out some connection with next season.

House of the Dragon Episode 10 Recap: The War Council

At the Black Council, Daemon count on the Dragons. While, the greens have four dragons namely Sunfyre, Dreamfyre, Vhagar, and Tessarion, The blacks have some more. Among all those dragons, Blood Wyrm, Caraxes, Meleys and Syrax are the most important ones that played a major part in the Westeros war. Before Rhaenys comes to Dragonstone, Lucerys and Rhaenyra have a conversation about the map of the Westeros. Luke tells his Rhaenyra that he doesn’t desire for Driftmark and it is Vaemond who deserves the Velaryon lordship. Listening so, Rhaenyra puts Luke at ease quoting that she was also nervous when she took her father’s position and now she will guide him with the responsibilities. The sweet moment soon ends with an alarm of Rhaenys’s arrival.

After Rhaenys informs the blacks about King Visery’s death and Aegon’s crowning, they realize that they should immediately shore up their powers. Further Damon asks Rhaenys that why she did not burnt the usurpers while leaving from Dragonspit, but she tells that the war is not mine to begin, which means even if a war is going to happen, it has to be started by someone else. The news devastates Rhaenyra, but before should could react to it, she bleeds.

While Rhaenyra experiences the early labor pain in her chamber, Daemon calls his allies for a war council. But before he takes any action, Jaecerys stops her as Rhaenyrs has commanded her to discontinue the war plans. As Daemon is forced to cease the war preparation, he uses his power games and orders the Kingsguard to promise loyalty to their new queen. Daemon doesn’t return to Rhaenyra until she gets relief from her labor pain and delivers a baby. Further she performs the burial rites and funeral is held by the residents of Dragonstone. Thereafter, Ser Arryk and Lord Corlys enters the frame as unexpected allies and Rhaenyra receives her own crowning on the Dragonstone along with loyalty from her allies.

The funeral is then continued by first official war council with the new queen affirming her new alliance by her side. However, they are a bit unsure at whose side Stark, Arryn and Baratheon will fall. Next, Rhaenys says that Velaryons’ feet is at the orders of Lord Corlys who is on his way to Dragonstone.

When the conversation draws on the Dragons, Daemon briefly takes over the council, assuring that they have seven claimed dragons and six riderless dragons in comparison with the Hightowers who just have four dragons.

Before the ice between Daemon and Rhaenys could break, they receive news of the envoy’s arrival from the King’s landing.

While Daemon rushes to the Dragonstone’s bridge to meet King Hightowers and his team, Rhaenyra lately appears and blocks the team’s exit. Otto states some conditions to Rhaenyra to bend their knee in front of King Aegon. The terms were: they would get Dragonstone, Luke would be Driftmark’s heir and her and Daemon’s sons would be the squire and cupbearer of Aegon in the Red Keep. While Daemon quickly refuses to the terms, Rhaenyra only has stale oaths. Thereafter, Otto gives a folded paper piece to Rhaenyra that she abstracted from the history book while chumming around with Alicent when they were friends. Before the stiff conversation could take a brutal turn, the usurped queen halts them and tells Otto to wait for Rhaenyra’s response.

In another war council, Rhaenyra states that her responsibility to Westeros is to bring peace to the kingdom to which Daemon replies that Otto Hightower has already begun the war. Further, when no one is around them Rhaenyra reminds Daemon about her oath, Daemon grabs her throat quoting Dragons made the Targaryens Kings. When Daemon lets Rhaenyra go, she realized that her father revealed nothing about the century-old prophecy to Daemon.

When Lord Corlys awakens at Dragonstone, Rhaenys blames him for leaving him at the battles at war and later informs him about Viserys’s death. Corlys tells Rhaenys they should now live a peaceful life with their grandchildren on Driftmark, but Rhaenys reminds him that Joffrey, Luke and Jace will not be safe if we don’t fight for them.

While Rhaenys and Corlys swear fealty to Rhaenyra, the latter still refuses to strike the first blow in the battle. Jace suggests that Luke and he should convince the Lords, and her eldest son should go to the Winterfell and Eyrie and the younger son should see the Storm’s End. Rhaenyra agrees with Jace but she swears to them they must visit the Lords as messengers and not as warriors.

When Luke comes to the Baratheon castle, Aemond is already present there. Borros tells Luke that Aemond has promised to marry one of his daughters, which Luke can’t do as he is plighted to Rhaena. Baratheon refuses to support Rhaenyra and sends Luke back. But before Lucerys can leave, Aemond demands an eye for an eye. When Lucerys keeps his promise to Rhaenyra, Aemond steps towards him, but Baratheon stops them from fighting under his roof and sends Luke to Arrax (his dragon).

Luke flees off with Arrax, but Aemond catches up on them through Vhagar and chases him in the storm. For a moment, Luke evades the chase and emerges into a sunny sky. After a calm moment, Vhagar who is completely out of control, catches Arrax and Luke is his mouth and tears both in two parts.

The ending scene shows Daemon rushing to the Dragonstone Hall to inform Rhaenyra of Luke’s death leading her in grief. It’s only a point until the queen turns her face in rage. So, the first strike of the battle is finally thrown, and the War has officially begun!

With that, the House of the Dragon Episode 10 ends with a cliffhanger only for the second season to continue after Luke’s death! Hope you have liked the season’s finale spoiler. Watch the last episode streaming on Disney+ Hotstar and tell us about your favorite scene from in the comments section!

As expected, the House of the Dragon season finale didn’t blow our minds at all. We know Luke’s death has stroked the first Targaryen war, but he was a less critical character to use in the finale. Now, we must wait for the next season to kick off the revenge saga. House of the Dragon has always been about the queens, princesses, and Targaryen’s story. As a prequel to Game of Thrones, House of the Dragon was a good attempt, and we are sure the show has a long journey to go ahead. Hope you have liked the season’s finale spoiler. Watch the last episode streaming on Disney+ Hotstar, and tell us about your favorite scene in the comments section!