Black Panther Wakanda Forever Trailer: Everything You Need to Know 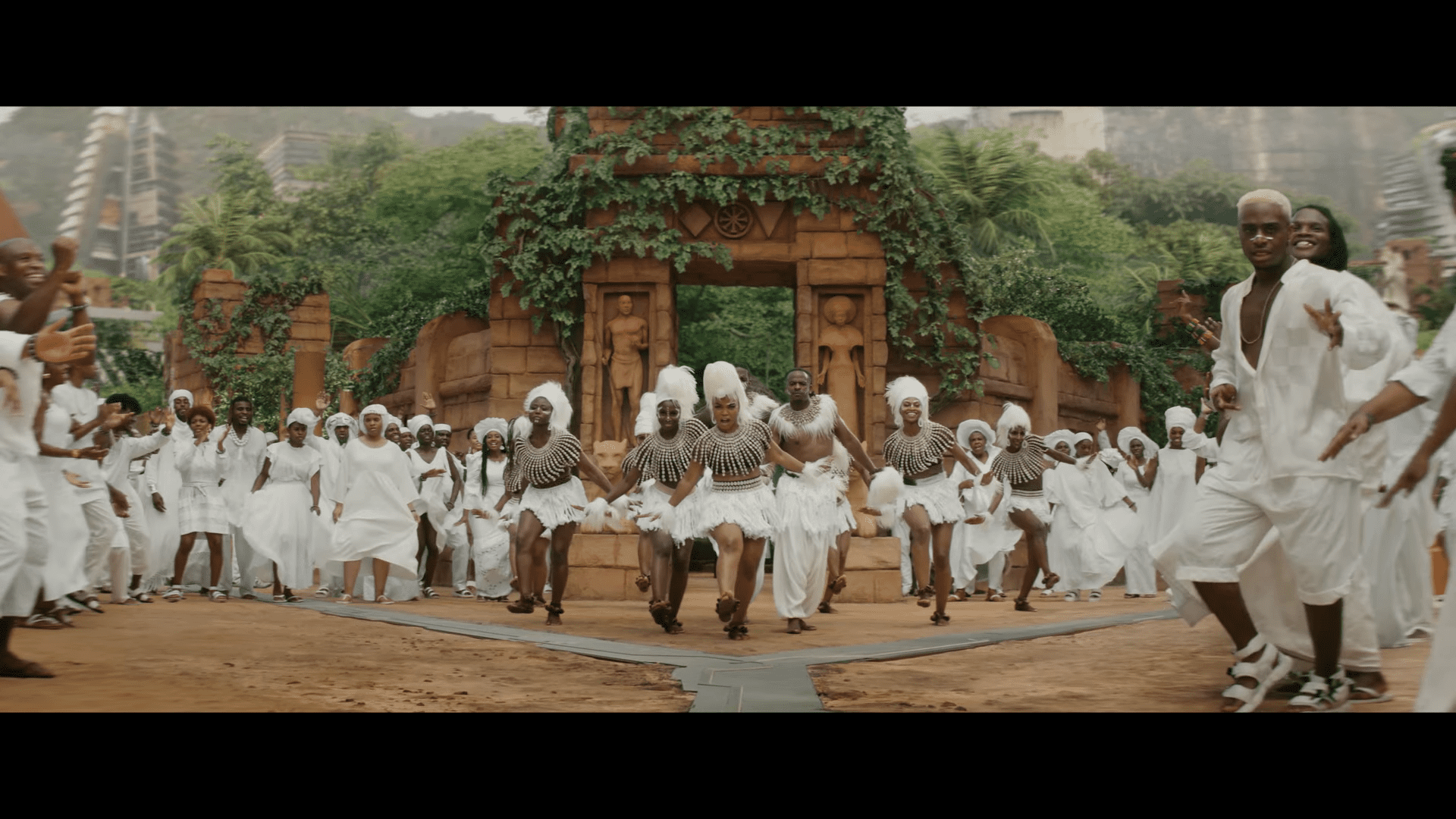 Hey guys! We have got the Black Panther Wakanda Forever trailer It’s Wakandans Against the World!, The Revenge Saga Behind A Devastating War Awaits the Wakandan and this movie will undoubtedly be one big hit. Here is everything we have understood about the Black Panther 2 Sequel.

The new trailer of Black Panther Wakanda Forever has arrived on social media platforms, and guess what? It has turned the heads around. The trailer is neither funny nor cringing. It is beyond what we expected from its teaser. Not to forget, this isn’t the trailer we were shown at the D23 Expo. The event organizers presented a special movie clip for those who attended it. Some of its clips are added in this trailer, but it’s completely different from the teaser. Hopefully, we will see those special clips around the movie release.

Much like the last trailer, we still have many surprising twists and turns around the movie, but we have covered a few more things. 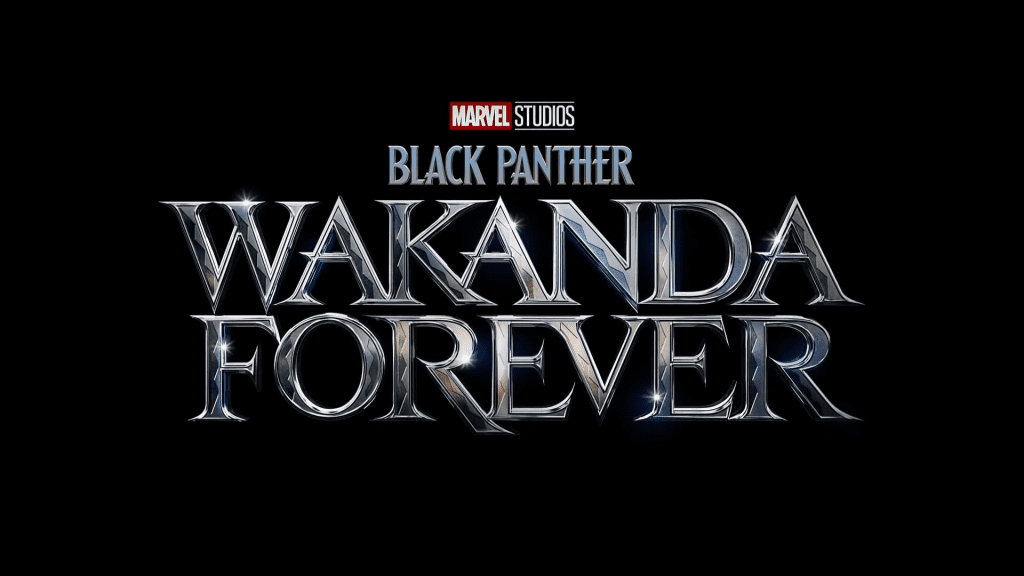 This trailer has given us a better look at the film’s villain, Namor, and what happened to T’Challa. The first look of Riri William is also revealed in the clip, whom the comic enthusiasts know as Iron Heart. How can we miss it? The trailer has wrapped up by giving us the enriching Black Panther look.

So, we know where the movie will be going and what we can expect to see. However, I still don’t know who is behind the Black Panther helmet.

Black Panther Wakanda Forever: Who are the Cast and Crew This Time?

Once again, the Black Panther Wakanda Forever is made under the direction of Ryan Coogler. Letitia Wright, Angela Bassett, Martin Freeman, Winston Duke, Lupita Nyongo, and Danai Gurira will return to reprise their respective roles from the previous film. Also, this sequel has added Mabel Cadena, Dominique Thorne, and Tenoch Huerta to the cast.

What character the new Black Panther Wakanda Forever Cast plays will be revealed once the movie enters the theatre. And, we won’t have to wait for it too long, as the Black Panther is all set to release on 11th November this year. 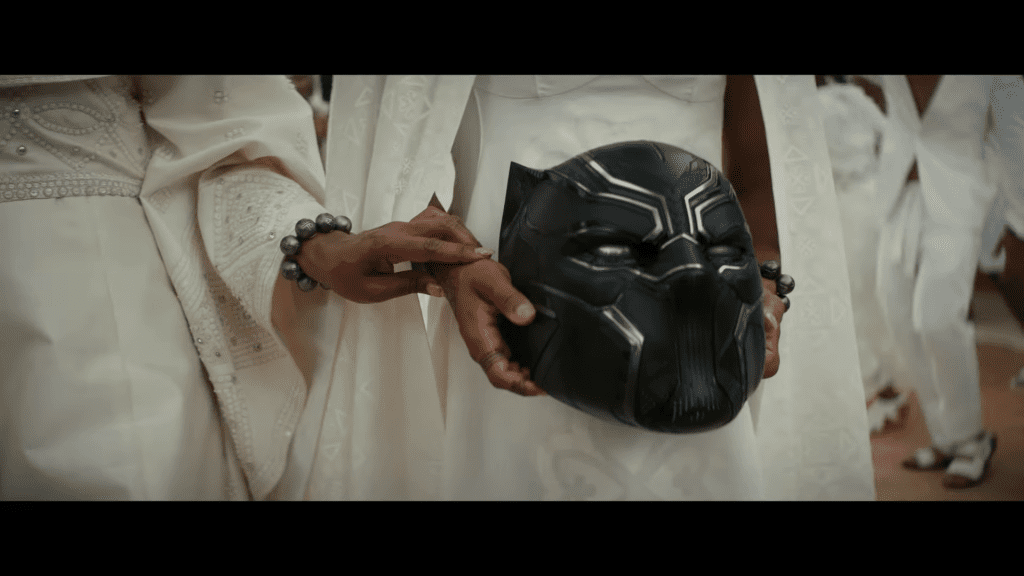 The trailer starts with the funeral of Chadwick Boseman, where his mother is carrying off his helmet in her hand, giving tribute to his son, and someone else is saying goodbye. She wears a Kimoyo beat that performs multiple tasks like communication, scanning, etc. In a dispute among the Mighty Avengers, wearing white means someone they love has died.

Here we see a poster of Chadwick Boseman on the wall dropping a message in Aurebesh’s language. The message conveys- The Panther King forever lives in us and Rests…….

Therefore, all this signifies the passing away of T’Challa. 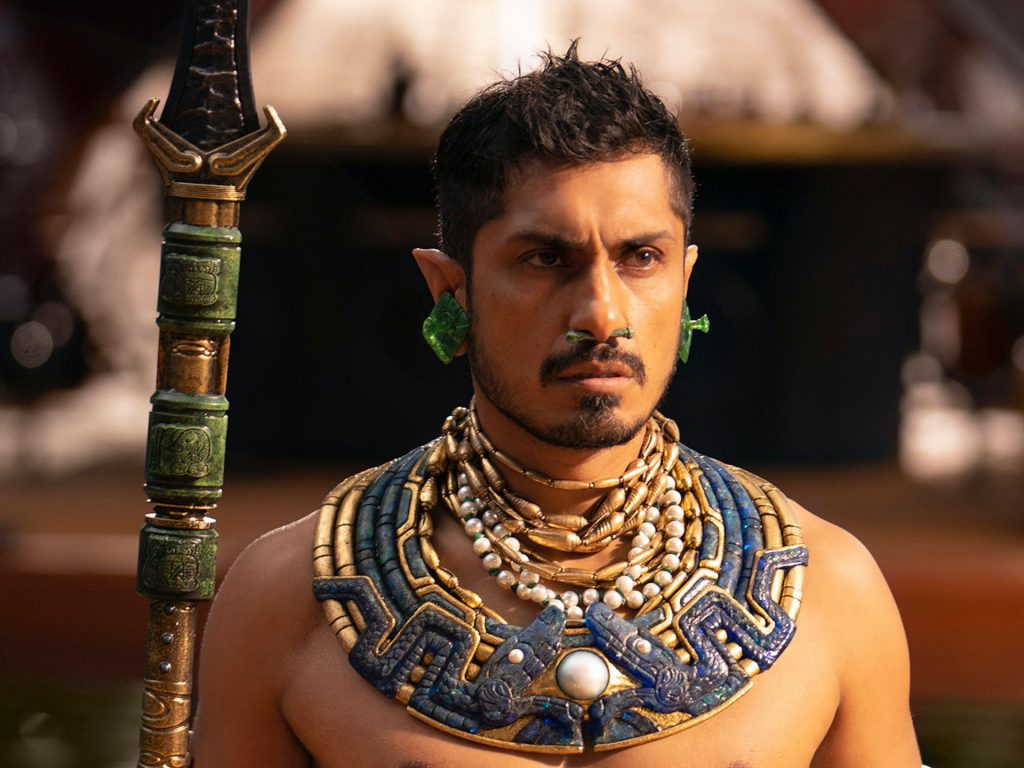 While we watch the trailer, a dialogue appears in the background. Only the most broken people can be great leaders, which reflects Namor. He is one of the most complicated anti-heroes and supervillains of the Marvel comics who transforms his character at every point. Namor is the leader of Atlantis, who has had a traumatic experience in the past that made him broken and a villain at the same time. He is a hybrid of an Atlantean and a human- because they don’t have blue skin.

If you would have noticed, the movie has also revealed a weakness of the Atlantean tribe. Once the tribe’s people land on the ground, they struggle with breathing, requiring a mask. After that, we see Namor sitting on his throne underwater along with a sphere, which is no doubt his most potent weapon in the film. 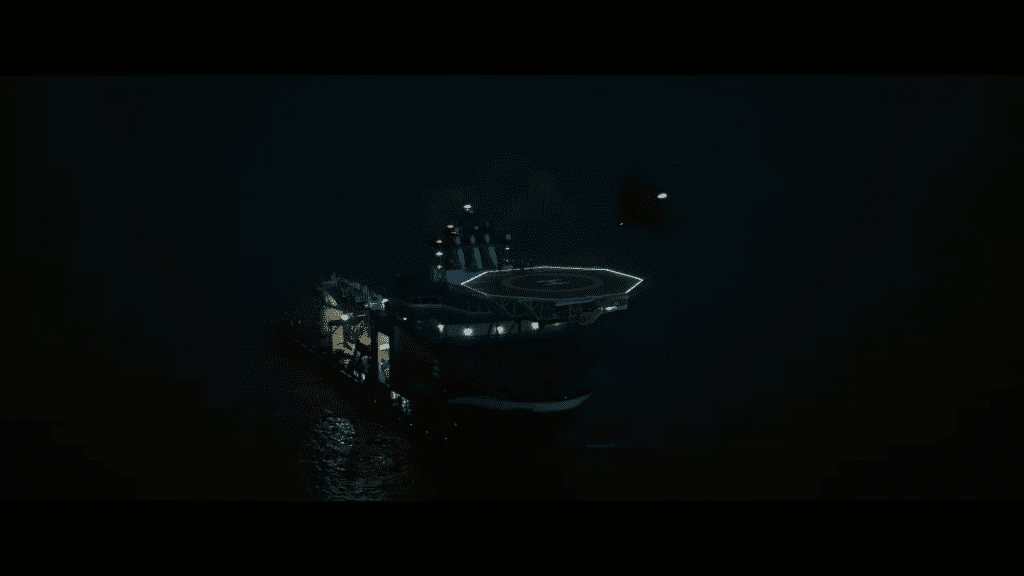 In this scene, there is a view of a helipad with a Wakanda base inside. There is a shot where human beings are sending some people into the sea by giving them a suit to wear. Also, some soldiers have crawled on the ship to steal vibranium.

The ship in the Black Panther Wakanda Forever trailer belongs to Wakandans, in which some Talocans have also jumped to fight for the vibranium. Meanwhile, it is also revealed that some researchers on the ship are Wakandans or members of Dola Milaje who thrash the mercenaries.

Next, in this shot, we see make talking about the sky god, discussing defeating Namor. Meanwhile, we finally see Namor flying with his wings and the Talocan power he has had since birth. 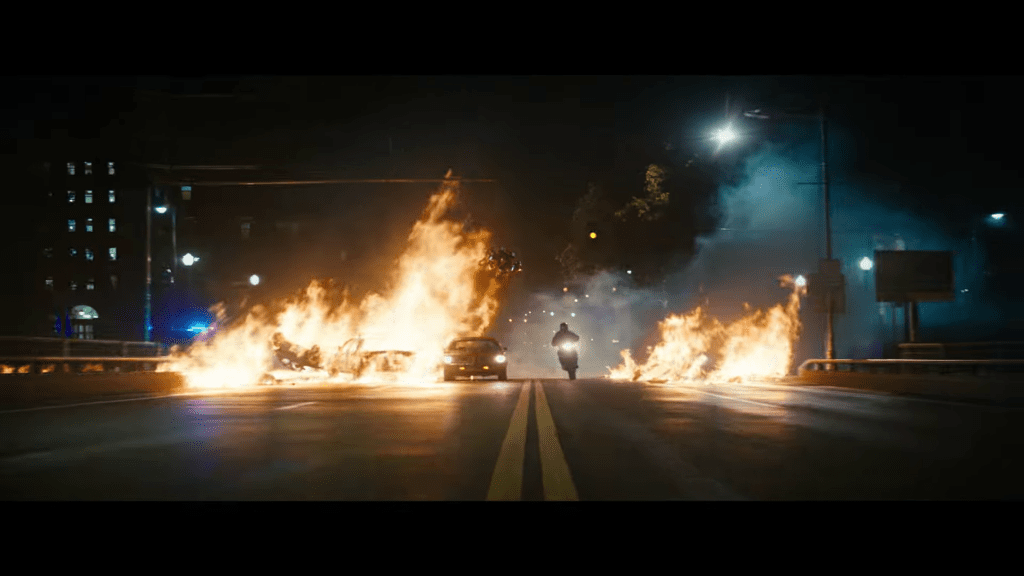 The new trailer of Black Panther Wakanda Forever has also shown a blurry picture of a gigantic conflict between the Atlanteans (most of whom have blue skin) and Wakandans. The war between the two will be a significant scene in the film.

Dora Milaje removes her disguise and fights back with the mercenaries. Shuri is saying to her mother that Namor is coming to attack Wakanda. There are some action sequences where Falcons are arriving for an attack, Dora Milaje and Mercenaries are involved in a fight, and Namor and Queen Ramonda are discussing something, where they are seeing off each other and settling their disputes. 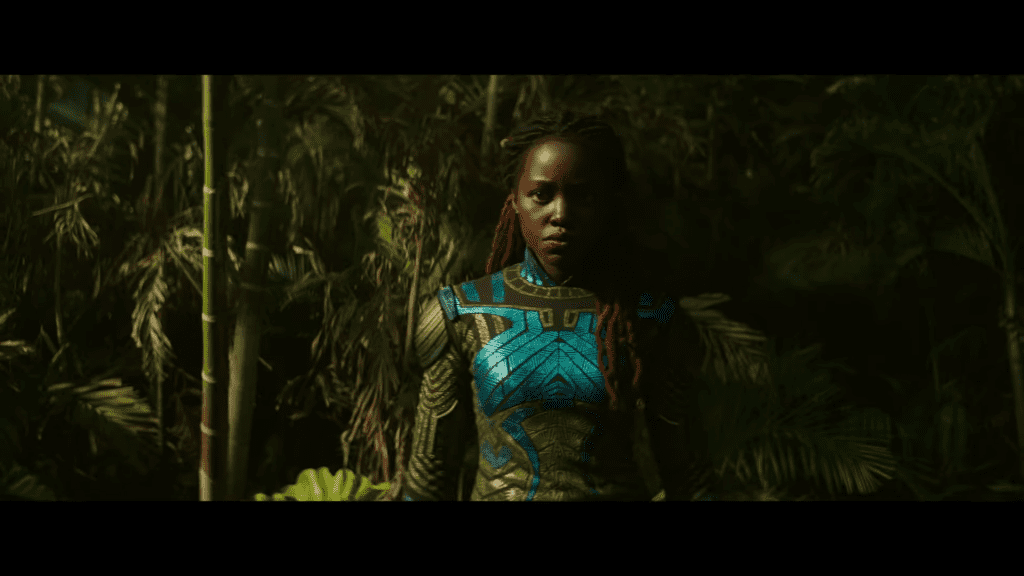 Nakia has appeared little in the trailer, but she’s most likely struggling with the death of T’Challa (her love), and she may be behind the Black Panther mask.

Talking about Riri, we will see the shots of her face and her reactions to the surrounding actions while she continuously flies with her suit. 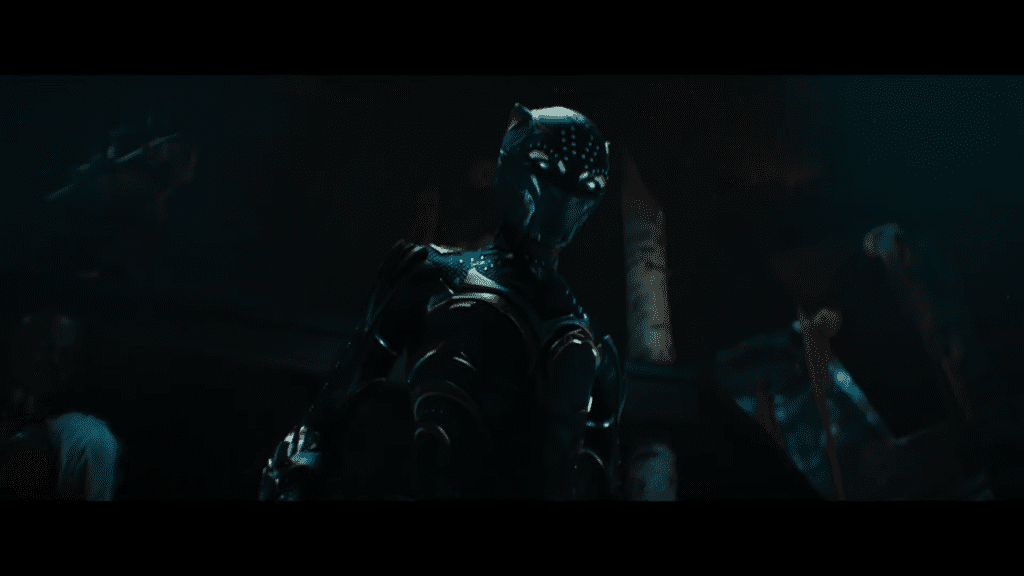 So, the last clip of the trailer presented us with what we were all waiting to see. It’s none other than the Black Panther. But this time, it’s a woman with a mantle. It could be Okoye Shuri, Nakia, or even Queen Ramonda. Chances are higher that it’s Shuri Okoye.

Now, until we bring you more updates on the movie, do tell us about your favourite moment from the trailer and who do you want to be the new black panther?