Barbie Teaser Trailer, Plot, Cast, Release Date and Everything You Should Know

A Greta Gerwig Productions, the Barbie teaser trailer offers viewers a fun and nostalgic experience. Barbie is an upcoming adventure comedy fantasy film starring Margot Robbie and Ryan Gosling in the film’s main roles. It is one of the most anticipated film of 2023, irking audiences to experience the journey of a Barbie who sets off for the human world to find true happiness after she is ousted by Barbie’s land.

Hollywood has made numerous Barbie animated films to date, but no other could have this hype as the 2023’s Barbie. It is the first Barbie movie so far to feature a live-action drama of the pink cars and classy outfits. It may not be a new bulletin for you, as the idea was discussed a long time back, but with Margot Robbie and Greta Gerwig finally giving a green flag, audiences are going gaga to see the film swim in theatres. Ideating how this new Barbie tale will roll out, writers Noah Baumbach and Greta Gerwig teases the Barbie trailer on 15th December 2022.

The Barbie teaser trailer kicks off with a narration- Since the beginning of time, since the first little girl ever existed, there have been dolls. But the dolls were always and forever baby dolls, until…… and here the trailer introduces Margot Robbie on the earth. Happy and excited, while all others are scared to see a giant doll. Read the complete article to know more about the Barbie film.

What Happened in the Barbie Teaser Trailer?

As said, the Barbie teaser trailer starts with a narration explaining how dolls have been on earth for a long time. While Helen Mirren’s voice reveals about doll’s existence, we see two young girls playing with and pampering the dolls. The baby dolls are combed, they are fed, they have cared for, and they are loved. The girls befriend the baby dolls and spend good time with them until and unless Margot Robbie arrives on the land, giving them a little wink.

Yes, the Barbie teaser trailer 2023 also shows a glimpse at the cute giant doll who arrives wearing a striped swimsuit in the human world. Isn’t she pretty? As Barbie lands on earth, three girls gear up around her and touch her legs to find out who she is. Overwhelmed with her large size, the young girls eventually throw their long-old friend baby dolls and smash them for no good reason. What’s next the video clip unveils is a beautiful-pink Barbieland that sees the Barbie overlooking her real world, followed by some fun dance parties, the first look of Canadian actor Ryan Thomas Gosling and at last, we see actor Issa Rae cheering alongside.

What is the Titular Song of the Margot Robbie Barbie Movie?

The Barbie movie trailer 2023 graces the screen with a piece of peppier music, leaving the fans questioning the film’s titular song. While anticipations ran that the 2023 Barbie film will feature the iconic Aqua anthem, many also expect Greta Gerwig to come up with a new title song for the live-action adaptation. Sources close to the film suggest the Aqua anthem won’t be featured in the film’s soundtrack. Disappointed?

Barbie Release Date: When is the Comedy Fantasy Film Releasing?

Despite the release of the Barbie teaser trailer, fans are still far away from the film’s theatrical release. The CinemaCon 2022 held last year saw Warner Bros confirming the Barbie release date for 21st July 2023. When the film made its official announcement in 2018, expectations were Greta Gerwig would release Barbie sooner.

However, owing to the global pandemic outbreak, Barbie producers paused the movie’s production for good. By the period everything falls into one place, Greta and Noah have completed their work on White Noise, allowing Robbie to spend enough time for her role in the July 2023 movie. With Christopher Nolan’s Oppenheimer also confirmed for a 21st July release, we may see the fantasy and science-fiction film at loggerheads in theatres.

Barbie Plot: What is the Live-Action Adaptation Film About?

One of the most awaited Margot Robbie movies, Barbie is a new hot topic among film maniacs. While constant anticipations for the Greta Gerwig movie are floating everywhere, a piece of detailed plot information for the genre isn’t disclosed yet. According to the official synopsis given by the production, Margot Robbie’s Barbie will embark on her new journey in the human world after being expelled from Barbieland for being an imperfect doll.

Who is Likely to Feature as the Barbie Cast?

You now know about Margot Robbie’s role as Barbie; we have Ryan Gosling as the giant doll’s love interest. Initially, when the Canadian actor was offered to play the male doll, he denied Greta following his busy dates. Still, the global pandemic outbreak eventually led him to coincide with the July 2023 project. After he plunged into the film, Warner Bros. didn’t wait to reveal Ryan’s first look from the film, treating his fans with the best July 2022 surprise the previous year.

Reports say Hari Nef and Issa Rae will also play with one of the Barbie dolls in Barbie land. Meanwhile, Ncuti Gatwa and Simu Liu are believed to play some distinct versions of Ryan Gosling, aka Ken. Although, what roles exactly these actors play in the film isn’t confirmed either. As the Barbie teaser trailer plays no dialogue, getting into the character’s involvement in the film is quite difficult for the moment.

Watch the Barbie movie releasing on 21st July 2023 in theatres and share your experience with us. And, meanwhile if you are enjoying our work, do subscribe to the page and stay connected. 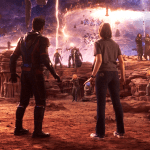 Next Story
All Hail, House of the Dragon Golden Globes Winner of Best Television Drama Series