el Sapochnik direction achieved what Game of Thrones could not. While Severance, Better Call Saul, The Crown, and Ozark were also in nominations, it was HBO’s House of the Dragon that took home the Golden Globe award for Best Television Series.

Who Accepted the Award for House of the Dragon?

Elated by the remarkable victory of House of the Dragon, Miguel Sapochnik accepted the Golden Globes 2023 for the Best Television Drama series. While the under-dressed director stepped on stage to receive the winning title, he also requested the crowd to applaud the show’s lead faces. Emma D’Arcy and Milly Alcock accompanied Miguel Sapochnik in the golden hours. While, of course, he thanked the television network HBO for believing in him with House of the Dragon, he was also seen praising one of his fellow nominees, Severance, at the ceremony. In the end, Miguel was delighted that all their efforts finally paid off at the 80th Golden Globes 2023. He was elated by the immense love fans expressed for the show, making the series Golden Globes 2023 Winners. Everything is so special for the House of the Dragon squad now.

What is the House of the Dragon Series About?

House of the Dragon was a 2022 American fantasy series by the HBO Max television network. Set 200 years back, Emma D’Arcy and Milly Alcock starrer, House of the Dragon chronicles the disputes of the Targaryen dynasty as they lock horns for the ultimate Iron Throne. Paddy Considine plays the Targaryen’s first ruler King Viserys, with Alcock and D’Arcy playing the young and adult versions of his daughter Rhaenyra respectively. Matt Smith plays the brother of King Viserys, Rhys Ifans co-stars as Otto Hightower, and Olivia Cooke as the latter’s daughter Alicent Otto Hightower.

House of the Dragon consists of ten episodes, with the first installment premiering on 21st August 2022 and season 1 concluding the series on 23rd October 2022. Owing to the show’s success and increased fan demand, HBO Max has already renewed its darling show House of the Dragon, with yet another season, possibly returning in 2024. With the show’s first season acknowledged as the Best Television Drama Series, the expectations are much higher. What do you think? Will Miguel Sapochnik succeed in rebuilding the same legacy again? 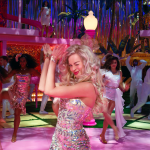 Next Story
Henry Cavil is Back! – The Superman Actor Returns with Amazon’s Warhammer 40000!